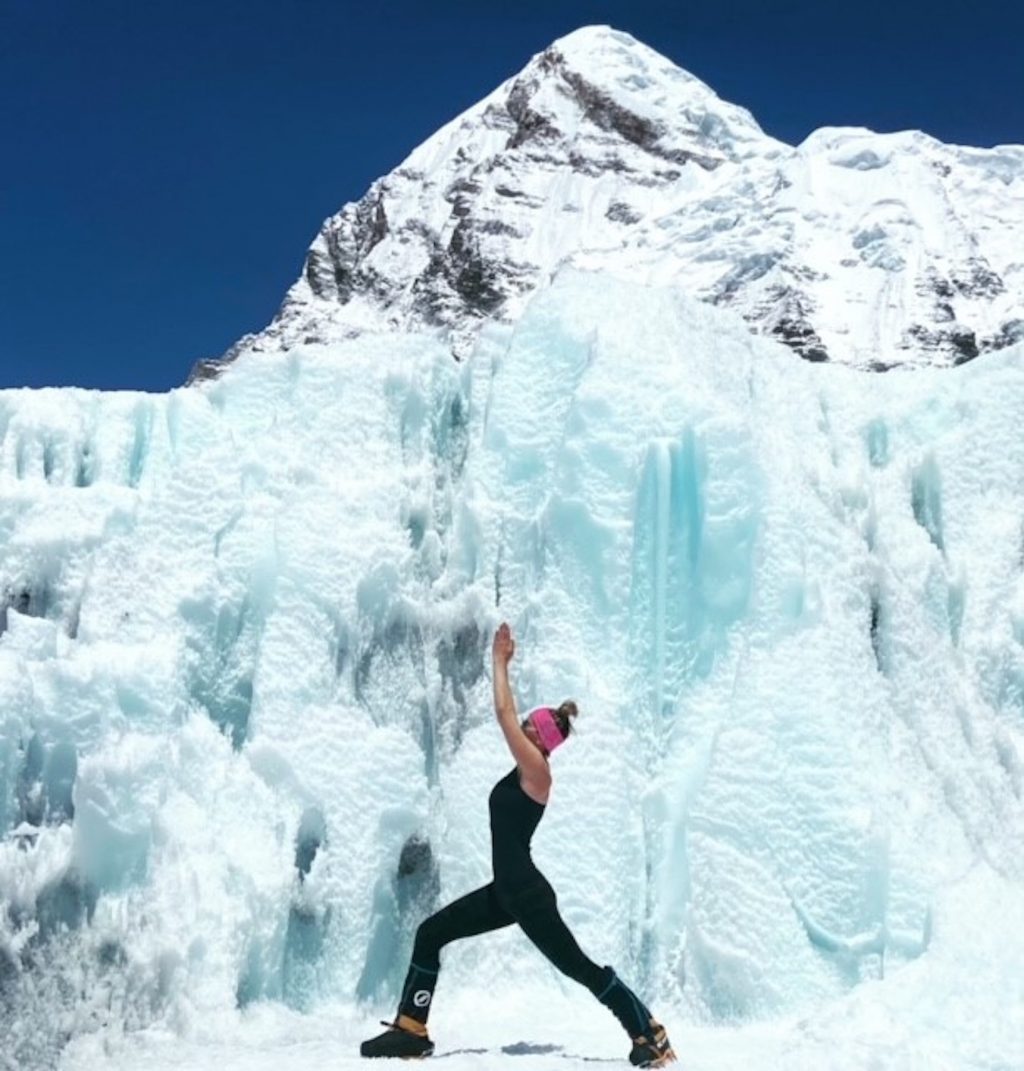 How does this become a part of one’s daily conversation… “I just returned from Antarctica, Last Degree Ski to the South Pole, and summiting Mt. Vinson.  Now, I need to make sure the frostbite heals before I leave for Everest in 2 months”.  Well, in my case, it comes from a life of GGRIT (gratitude, growth, resilience, integrity, tenacity) and choosing to rise.Having been a stubborn middle kid with learning disabilities, I developed an insatiable thirst to prove I was good enough. I was diagnosed at age 7, after I refused to read, due to my teacher severely berating and harassing me. My mother was told, I would not achieve much academically.  She did not buy into it and sat me down and said, “Sweetheart, you can be anything you want to be, you’ll just have to work harder than everyone else”. And that’s where it all began.

The embarrassment, shame, insecurities, discrimination, and repeatedly being told, I can’t, forced me to develop resilience early. I had to accept failing over and over again, and then choose to get up for more.  It is purely positivity and tenacity that got me through school, to earn degrees in aerospace engineering.

Through all of this, I found refuge in the mountains of Colorado. Things came naturally to me there and I found peace. At 29, my first international adventure started like everyone else’s, an impulsive decision after a heart-ripping breakup. Ha! I trekked for 25 days through the Annapurna region of Nepal.  I traded one love for another on that trip. I fell head over heels for the rush of the unknown. I was always saving money for my next adventure: Mt. Fuji, Inca Trail, Running with the bulls, skydiving, scuba diving, Kilimanjaro, Everest base camp.  However, this all came to a screeching halt in February 2011.

It was an epic day in the back bowls of Vail. I was boarding high speeds through a shoot when I hit a fallen tree, hidden under 4 feet of powder.  I broke the head of my femur off the bone, spiral fractured the shaft, and ripped every muscle lose. I was lucky to be alive, I woke up to a 14” titanium rod holding my leg together and was told I’d have to be in a wheelchair or use a cane, for the rest of my life.

Like my mother, I did not buy into that. The little tenacious dyslexic girl inside, rose quickly and vowed to hike tall peaks again. The recovery was excruciating and prolonged. Month after month went by with little progress. Chronic pain was taking its toll, but I refused to give up. I remained grateful and dedicated. After 1.5 years of surgeries, PT, injections, and sacrifice, I still could not walk up a flight of stairs without my cane. We tried the only option left, remove the rod. Yep, turns out I have a rare allergy to TI.  Within 1-month post-surgery, I could walk stairs unassisted. Within 6 months, I returned to Everest Base Camp.

I was stronger than ever. Not just physically, but mentally. My tolerance for pain and endurance for suffering increased significantly. So, I climbed Kilimanjaro again. I literally ran across the top, to reach the summit at sunrise. I wanted to go even higher.

Aconcagua was the logical (in a crazy sense) next step.  At 22,837 ft and consumed by hurricane-force winds, this was my first truly big mountain (crampons, 45lb backpack carry, evacuations, death). I embraced every moment.  After the summit, I celebrated in the wine country of Mendoza. I met a lovely woman, Laura, who had just finished her 7th Summit. “If that was easy for you, you should do Denali next. If that goes well, you can totally do Everest.” And just like that, I committed to climbing the Seven Summits.

Elbrus, 18,510’, was next. Russia was beautiful and inviting, other than the surprise colonoscopy and 36 hours in a St Petersburg hospital. Apparently, I ate something that couldn’t wait to escape my body.  Luckily my climb was already over.

Now, it was time to take on Denali. But I needed to level up. To make “Varsity”, I needed to improve my skills and gain more experience. I had to be willing the learn and grow. And I needed to take it seriously. I started ice/rock climbing, rescue clinics, alpine and prep courses, and long training days on the mountain.

Denali is the great equalizer. She does not care if you are male or female, 120 or 220 lbs., your net worth, or how many followers you have.  You are treated the same and she will either show you grace or chew you up. This climb is unsupported. Meaning, we are each responsible for carrying everything, on and off the mountain, in a 50 lb. pack and pulling a 50 lb. sled. Through extreme conditions, crevasses, insane wind, and steep fixed lines.  We made our way up this 20,310 ft maneater.  My greatest lessons learned were not just physical, but rather mental and emotional. Of course, weather and terrain are unpredictable. But, so are new teammates.

After the summit, the man roped directly behind me starting unraveling. As we started the steep and long descent down deadly narrow ridges, I heard a voice behind me say “I can’t do this, oh god, I can’t do this”. Looking down at thousand-foot drops, I shouted back “You BETTER F’ing DO THIS! We have a long way to go”. He was roped to me. If he goes down, I go down. He spent every ounce of energy just getting to the summit. He had nothing left in the tank. He was dragging and I had to pull him.

After throwing tantrums and refusing to descend past 14,000’ camp, the Rangers declared him a “danger to himself and others” and finally helicoptered him out. The rest of us had to split up and carry all his gear the rest of the way. I realized you must be able to react quickly and calmly to chaos.

I hadn’t even returned to Alaska when I started planning Everest. And why stop there? I decided to go for the Explorers Grand Slam, adding on the Last Degree Ski to the North and South Poles. Only 12-women have completed this goal. 13 sounds like pretty lucky number to me!

There was no sense of fear, just excitement. There was no doubt in my mind I would soon be sitting on the summit of Everest. But once again I would need to double down on technical training and earn that spot.  I was totally dedicated to training, pushing my endurance, seeking to increase tolerance further. That desire I felt as a child… to be good enough, to be accepted, to achieve greatness (but not die in the process). I did NOT want to be “that person” on Everest who shouldn’t be there. Too often, people just pay a big money to go up Everest, not having ever worn crampons. This is extremely irresponsible. I was willing to train harder than everybody else to reach the summit of the highest mountain in the world.

The Khumbu icefall is a mystical, constantly changing labyrinth of intrigue and danger. Jumping over crevasses, ascending 50 ft vertical walls of ice, and dodging boulders of ice, I was in my element. All the work was paying off. Our team moved up/down the mountain with ease. But, after 5 weeks on the mountain and our 3rd rotation to camp 3, my body lost a lot of strength. For the first time, I questioned if I could make the summit. That scared me. I knew this was a serious mental challenge and I would have to pick myself up and rise.  No one could fix it but me.

I dug deep to confront any insecurities or doubt I was feeling.  I had to accept exactly who I am and believe I was good enough. And at that moment, I became limitless. I built back my strength and was ready for the summit. Unfortunately, the summit was not ready for us.

We were hours from leaving for the summit bid when our expedition was canceled due to Covid. Our climbing sherpa teammates were positive with the Delta variant.  I was strangely calm. I know the difference between disappointment and devastation.  This was disappointing. Devastating is the loss of one of our teammates, Pemba Tashi Sherpa, who died in a crevasse a few weeks earlier. I see no point in wasting energy over a thing I have no control over. This is part of the overall journey, right? When things do not work as planned, you have the choice to give up, or get right back up and try it again.

I went home drained, but soon learned Antarctica would be open for the 21/22 season, and I had a spot on the CTSS team.  It takes great effort and expense to just get to Antarctica, so I was pumped to climb Vinson and ski the last degree to the South Pole.

Union Glacier is filled with the best of the best mountaineers and polar explorers. Antarctica lives up to its reputation of adventure. It is remote, rugged, and unforgiving. But also, pristine, beautiful, and something that few get to experience.  I started with the Last Degree Ski to the South pole. Dropped in the middle of nowhere, we pulled 60 lb. sleds across 70 miles of snow sastrugi’s. After 7 days of -50 degree temps, horrendous ski boot blisters, and seriously questioning my sanity, we made it to the South Pole (9000’) for New Year’s Eve. How cool is standing where all time zones converge? We celebrated 2022, every hour. The next morning, we flew back to Union Glacier and then onto Vinson Base Camp.

My tentmate, Bulks, and I arrived just in time to sip champagne and talk shop with legends Dave Hahn, Ed Viesturs, Conrad Anker, and Jared Isaacman, who just returned from their climb. Apparently, the universe was shining down on me. I hoped that unicorn karma would stay through my climb. It did.

We missed our group climb, so went in between waves. Bulks and I were guided by world-renowned Tendi Sherpa (CTSS). The 3 of us had the mountain to ourselves. After being in Antarctica for over 3 weeks, we were overfed and highly motivated to get’er done. We moved fast and as one. It was truly a “dream team”. A climb that typically takes 5-7 days took us only 57 hours roundtrip (also known as BEAST MODE). On summit day, a snowstorm had come in and I sustained frostbite on my hand. So, we made the call to descend all the way back down to basecamp the same day. We reached camp at 1:00 am.  I fell asleep exhausted and extremely satisfied. Summit #5 completed.

This brings us to February 2022. I reflect on my evolution and journey to get here. What started as a little girl terrified of not being good enough, turned into a woman who endures the harshest of conditions over a long duration and thrives! Through GGRIT, I learned how to embrace obstacles and break any boundary.

I look forward to what comes next. I return to Everest in 2-months; wiser, tougher, and more focused. I will complete the 7-summits this Fall, with Carstenzs pyramid, the Grand Slam, and the North Pole (Spring 2023). Through my expeditions, I hope to inspire others to overcome any challenge. I dedicate my climbs to raising money and awareness for Dyslexia.

GGRIT IS A CHOICE… CHOOSE TO RISE

If you would like to learn more, or want to book Meghan to speak, and/or contribute to the next adventurous phase, visit WWW.GGRIT.COM / Instagram: @GGRIT

About the author : Kim

Rocket Girl – Breaking Boundaries for Women in Engineering and Mountaineering